We have added a couple of improvements for 2D floor plans, that make uploading 2D floor plan images easier. We are also working on couple of new features. That will make using 2D maps much easier.

3D and 2D maps share the same data in 3D Wayfinder. This is for using 3D and 2D side by side.

As 2D maps will be shown in 3D Wayfinder editor as textures on a plain. There are couple of requirements that have to be filled, like texture shape and size.

Now we have added automatic texture resizing. So 2D map images don’t need to be square-shaped anymore. The longest side should still be at least 1024 pixels, if its less, the map will be resized to this value.

We will also resize the map to the closest larger power of two when none of the sides is 1024, 2048 or 4096 pixels. The ratio between the sides will stay the same so the map image will not be distorted after resizing.

We require the longest side to be 1024 pixels. But if you want to have a large and good quality map, then uploading an image with 4096 pixel side is a way to go. 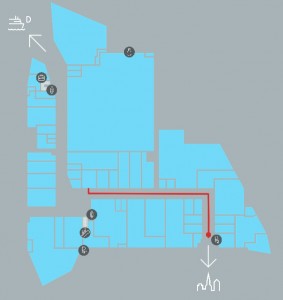 2D floor plans are a good start for wayfinding solution since they often already exist, so no extra effort goes into creating a map.

Right now our system allows uploading only raster files like PNG or JPG. Soon we will add new feature which enables uploading vector files like SVG. This means that maps could be zoomed in as much as needed and areas can be made clickable automatically.

We are also working towards the goal that 2D and 3D maps wouldn’t need separate templates anymore. It can be specified in the settings if you want to use the map as 2D or 3D.

This means that in the future it will also be possible to use both maps at the same time. 2D in mobile and 3D in kiosks.